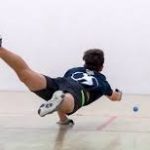 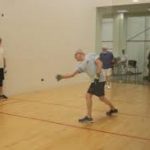 Handball is a sport in which players use their hands to hit a small rubber ball against a wall such that their opponent cannot do the same without the ball touching the ground twice. The three versions are four-wall, three-wall and one-wall. Each version can be played either by two players (singles), three players (cutthroat) or four players (doubles), but in official tournaments, singles and doubles are the only versions played.

Handball is played in a racquetball court.

Courts can be booked up to  5 days in advance