After more than a decade in the sport of tennis, Calvin Thalheimer is proud to join the Global Fitness Team as an instructor. 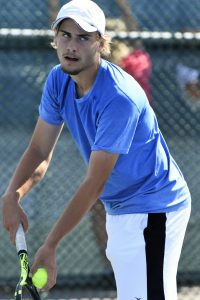 An all-sport junkie, tennis was not Calvin’s first (or even second) choice to play. Forced to join his sister in a rec centre tennis camp ultimately led to a realization of how much fun the sport actually was.

Calvin is a provincial and national champion in both singles and doubles – multiple times. He was a regular member of Team BC (and the only player from the Okanagan). He was a double gold medalist at the Western Canada Summer Games and part of the top BC doubles team at Nationals. He has been ranked in the top 2 provincially and the top 20 country-wide. Apart from his successful junior career Calvin also played in multiple professional and open draws throughout BC. Having received Division 1 university offers in the USA, Calvin chose instead to remain in Kelowna – his favourite city in the world.

Committed to his new role as coach, Calvin is grateful for the opportunity to pass on his technical skills, deep knowledge of the game and genuine appreciation for the sport to everyone at Global Fitness. He is personally committed to reaching ever higher levels of coaching ability and knowledge – all while keeping tennis the fun and fit sport it was always meant to be. Contact Calvin today to sign up!