Keefer Joyce: From sprinting to bobsleigh 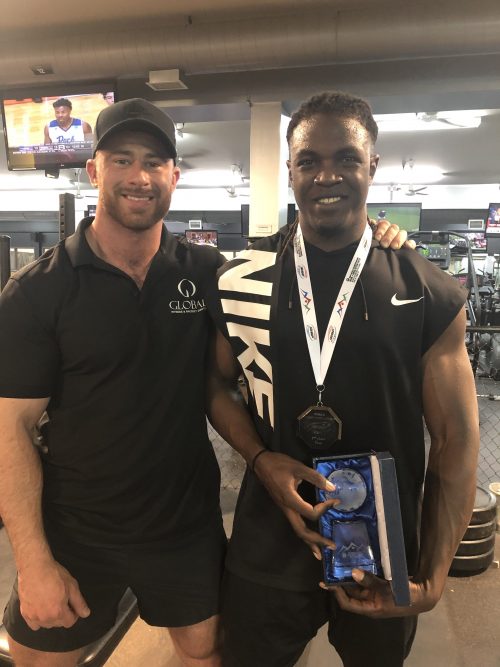 As a young athlete growing up in Kelowna, Keefer Joyce never once entertained the notion of careening down a snow-packed, ice covered track in a bobsleigh.

Fast forward to 2017 and the 23-year-old Joyce is in the midst of nurturing a whole new set of skills as a member of Bobsleigh Canada’s developmental team.

A track athlete with a passion for sprinting for as long as he can remember, Joyce said the shift to an entirely new sport has been an eye opener, to say the least.

“Honestly, if you would have told me back then I’d be doing this now, I wouldn’t have believed you,” said Joyce, a graduate of KSS. “It never crossed my mind to try (bobsleigh). I’ve always been hyper-focused on track.

“It’s weird to be getting another opportunity in sports, it’s overwhelming, exciting and scary all at the same time.”

The opportunity began to take shape this summer when Joyce became involved with the RBC Training Ground, a program designed to identify potential national team and Olympic athletes. Following visits to camps in Victoria and Richmond and testing in Calgary where Joyce’s speed was on display, it was apparent to national coaches that bobsleigh might be the Kelowna athlete’s best option.

Now the brakeman for both the two-man and four-man developmental teams, Joyce has trained and competed this fall with his Canadian teammates in Whistler, Calgary and Park City, Utah.

Graham Richardson, the coach for Canada’s developmental bobsleigh athletes, said the Kelowna native brings plenty of potential to the sport.

“Keefer has many attributes that have helped him transition from track to bobsleigh,” said Richardson. “He is a great team player which is not always the case when athletes come from track. He intelligent and so picks things up quickly, working on the sleds and associated kit is a minefield, where everything has to be done in the correct manner.”

“The main attribute that has brought him to us is his speed,” Richardson continued. “In order to progress to the highest level of the sport, Keefer needs to build explosive speed.

“He has already shown that he has some talent for pushing and has impressed the push coach with his easy transition to pushing and not just running.”

On the track, Joyce was one of the province’s top junior sprinters and has been to nationals at all levels of competition.

The highlight of his sprinting career came in 2011 when he competed at the 2011 Commonwealth Youth Games on the Isle of Man.

Two years after graduating, Joyce attended College of the Sequoias in Visalia, California where he was exposed to a whole new level of competition.

“It opened my eyes…division 1 is another big step up,” he said. “It would have been nice to continue, but it was a good experience. Whatever I do in sports, I’m thankful for the experiences I had on the track. (Sprinting) was my first love.”

Now, instead of approaching speeds of close to 30 km/h on a track, Joyce travels as fast as 145 km/h while riding in a 200 kilogram sled.

Joyce is well aware of the risks involved but isn’t about to be deterred by them.

“We had a crash already, so it’s good to get that out of the way early,” he said. “It can be dangerous, you can get serious ice burns, guys have had surgery on their hands. Whiplash, ribs, back injuries, it can all happen.

“But I know what I’m getting into. I’m just grateful for the opportunity. I want to stay in sports as long as I can, as long as my body will allow me to.”

Joyce and his family currently cover all expenses for his travel and training. If anyone is interested in supporting or sponsoring Keefer, he can be contacted at masterkeefer@shaw.ca.